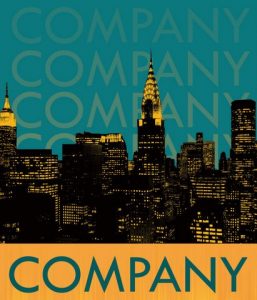 Stephen Sondheim broke some barriers almost 50 years ago when he did the music and lyrics for a musical which wasn’t the usual sort of story line or revue show. When it had it’s first season in NYC it won 7 Tonys. And it has been a standard ever since.

Actor’s Express has done a great job creating a new set for the show in their facility. It is performed with seating on 3 sides of the stage and a live band at the back of the stage. The cast of 14 players come on as a single guy, Robert (Lowrey Brown), who lives in New York and isn’t all that interested in a permanent relationship. Robert, a/k/a Bobby, is having his 35th birthday and 5 couples who are his friends show up to celebrate and bring him a cake.

The tune, Bobby, is used multiple times as the couples come and go and the scenes change. The story line is somewhat blasé, and the time changes are not that important. Bobby does see some women; and in Act II actually gets into it with a flight attendant, April (Kelly Chapin Martin), who has to decide if she wants to take off for Barcelona or stay in NYC with Bobby. Because, as you would expect, he decides that he is tired of the solitary life, and while the friendly couples may yearn for some of the freedoms that he has; he sees the benefits of being together with a caring partner.

Probably the best numbers, and the ones that we all recall are Side by Side, which deals with being with another, Being Alive which is belted out by Bobby when he finds love, and the one about Ladies Who Lunch, which was done to a such a happy crowd by Libby Whittemore. That’s the number that Barbra always did so well, although I don’t think she ever played the role of Joanne.

Freddie Ashley directed this one and it is VERY well done. Alli Lingenfelter is the music director and is on keyboard. In a time when all the political garbage is being tossed at us 24 hours a day, this is a welcome relief. Easy to get to, plenty of parking, and a comfortable venue. This is a solid 10. Their website is at Actors-Express.com