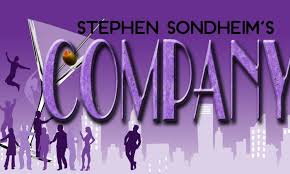 Out of Box Theatre

Sondheim’s Company is being staged at Out of Box, directed by Carolyn Choe. She has brought together a very entertaining cast of 14 players which is quite a feat for a small stage facility. If you have seen the show before you know the story is lame, and it is all about the music and the choreography. It resounds as ag typical Sondheim score.

Zip Rampy is Bobby, a 35 year old single loser who has no real attachments in his life, although he does spend time with friends who are all married or serious couples. Paul and Amy are to be married, but Amy has second thoughts, then third thoughts about her wedding. Dylan Parker Singletary plays Paul and Amy is Lauren Rosenzweig. Bobby even thinks that maybe he could score with Amy, but that doesn’t go anywhere.

Bobby also goes for a flight attendant played by Suzanne Zoller. He woos her, but it winds up as a one-night stand before she takes off for Barcelona. Each of the five couples in the show have a different input. One has an alcohol problem. And each of the five guys seem to be jealous of the “freedom” that Bobby supposedly enjoys. The underlaying theme being that his kind of freedom could be depressing boredom.

The score was recorded by Annie Cook on the keyboard, and works very well for the cast, who pull off the chorus numbers with great aplomb. The company doing Company plays Thursdays, Fridays and Saturdays at 8 and Sundays at 3. For more info and tickets just visit them at OutOfBoxTheatre.com