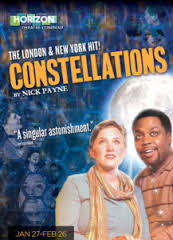 Nick Payne’s play about two star-crossed lovers, is more than just a bit on the weird side.  We find a bee keeper, Roland (Enoch King) who meets up one day with a physicist, Marianne (Bethany Irby).  What do they have in common?  Nada.  How could it evolve into a relationship?  And therein lies the play.

Justin Anderson directed this work on a very static stage with the cast of two players.  It runs in one act of about 85 minutes.   Can these two find anything in common?  Is there something which might bind them together rather than build a wall between them?

It is always impressive when you watch an actor who can be onstage for almost an hour and half, always be speaking and can remember every line in the script.  This one may be more (or less) challenging since so many of the lines are repeated quite a bit.  And, many of us might be watching and asking ourselves what exactly is happening?

It is not a show for kiddies, and has really nothing to do with the cosmos.  It is about relationships and how even those with a million to one odds against them, might somehow come to pass.  And, coming to pass is also at the end of the opus as Marianne starts the slide down when she battles a fatal disease and knows she is leaving Roland behind.  Ergo, those of us who may have endured such a passing may find it a bit difficult in that respect.

There’s little humor in this one, and it isn’t one such as Phantom or Cats which we’ll see more than once.  Is it well done?  Yes, it is.  And the audience really appreciated the fine work of the professional actors.  More info at HorizonTheatre.com