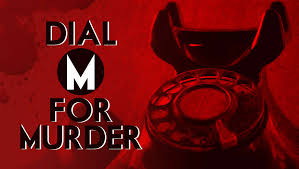 Few of us would know that this incredible play was written by a gent who grew up in China. He was from a family of British missionaries. The script was so well crafted that even Hitchcock took it to the big screen without any changes, and more than 50 years later it is still elating audiences around the world.

This production is a delight with Stage Door Players Artistic Director, Robert Egizio taking center stage as the conniving husband, Tony Wendice. His wife, Margot (Kristin Markiton), has some relationship with a Yank, Max Halliday (Chad Martin), who is visiting London. While Max and Margot may have interests in one another, Tony’s eyes are elsewhere. But, Margot is the one with the money and he decides that were she to predecease him, that everything could come out right in the end.

He drags in Thompson (David Allen Grindstaff) to do the nasty work. Thompson will be provided all the info and tools to do the deed, while Max is being set up as the alibi for Tony on the night of the murder. After all, Tony is a mystery writer and if he can’t concoct to perfect scheme, who could? And when the bell rings, the action will start.

Oops. Seems that something goes wrong and Margot survives, so what’s the hubby to do? Change the script and that he does. It is foolproof, except for the fools from Scotland Yard, who may be a wee bit smarter than Tony thinks.

Doyle Reynolds and Charles Green are the coppers, and they may find some tiny little omissions which may change the direction of Tony’s plot. OK, . . so you recall the film, and possibly the glitches that seal the deal; but this is a splendid production directed by Kate MacQueen, with a perfect set by Chuck Welcome.

The theatre is easy to get to, free parking, and all seats have a good view of the action.