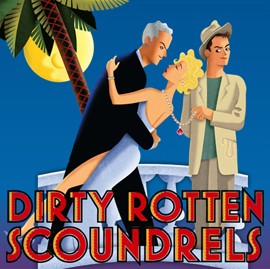 This musical version of the great film hit the stage in New York in 2005 to somewhat limp reviews. But, it has toured well and been locally produced to many appreciative audiences. And, this is one of the best productions done by Onstage Atlanta.

The story is about a couple of scam artists working the rich folks in a town called Beaumont-sur-Mer, on the Riviera. Lawrence Jamieson (Darrell Wofford) is the local A-list con artist who can come off as a Prince, a famous physician, and anything else that will get the job done. And he lives quite a good life. He gets a warning that some competitor called The Jackal, is seeking to invade his turf. But, nobody knows who it might be.

Then Lawrence spots a Yank named Freddy, (Daniel Pino) who is a playing for peanuts when he could be going for gold. Lawrence wants Freddy to hit the road but he declines to do so, and winds up becoming apprenticed to Lawrence. Not an easy job; as Freddy lacks many assets. Finally, these two guys make a bet, which provides that the winner keeps the turf and the loser leaves town. Of course, all hell breaks out.

Andre (Adam Bailey) is Lawrence’s man servant. He sees some things and smells some things which could be a problem. But, even his loyalty can’t solve all the problems.

There are three fair ladies involved who become the objects of adoration and exploitation. Jolene (Hannah Lake Chatham) is an oil heiress from Oklahoma, ans she comes off like a Dolly Parton when they do the Oklahoma song and dance number. Muriel (Abra Thurmond) and Christine (Misty Barber) are the other two problems. Especially Christine; but I can say no more lest you never saw the film or can’t recall what happens. Let’s say that these scammers observe the P T Barnum business plan and they just want to Give Them What they Want, so they can get what they can.

Directed by DeWayne Morgan, with a fine cast, a very workable set, and a live band off-stage; this show opened to a sold-out house and should enjoy a great run. It certainly is a winner and a load of fun. Tickets and times at OnstageAtlanta.com