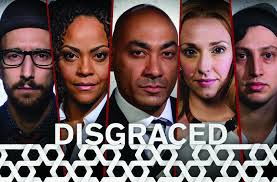 The show, Disgraced, may have closed but it shall not be forgotten. The artwork for the show does seem to suggest it may be about anti-Semitism due to the Stars of David in the images. But one needs to understand that Semites were several peoples from the middle east, including many non-Jews and Muslims.

The play, by Pulitzer winner Ayad Akhtar was directed by Susan Booth on a set that was so great that I could have moved into it, were it for rent. This work premiered at the Lincoln Center Theatre in 2012, and deserves to play to audiences who have the ability to think, regardless of their cultural backgrounds.

Amir Kapoor (Andrew Ramcharan Guilarte) is a VERY successful lawyer in a firm where most of the general partners are Jewish. He was born in this country to Muslim parents, but is lapsed, and has changed his surname to avoid being thought of as a Pakistani.

His wife, Emily (Courtney Patterson) is an artist with a deep appreciation of Islamic art. She urges Amir to stand up for an Imam believed to be innocent but facing some terrorist charges. He doesn’t want to get into it; but he does so to placate her. He simply stands and speaks for fairness in the courtroom. We never meet the defendant. But, the effect on Amir’s acceptance is very damaging.

The scene is set a dinner with a Jewish art dealer, Isaac (Andrew Benator) and his Afro-American wife Jory (Tinashe Kajese-Bolden) who is also in Amir’s law firm and also being considered for a partnership. So we have a Muslim, a Jew, a Black lady and a WASP getting submerged into the morass of faith, heredity, discrimination and morality.

Ali Sohaili also appears as Abe, the son of Amir and Emily, who had fully assimilated and changed his name from Hussein, only to wind up now wanting to stand up for what is right, as opposed to what may look correct. It is a one act production that you will want to experience when it comes around again. For you will certainly be one to understand the complexity of living in our time and in our place.