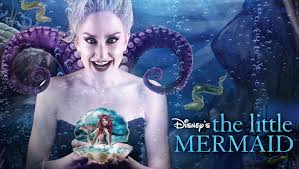 Let’s skip to the bottom line . . . this is one you want to dive into NOW. The incredible Serenbe Playhouse obtained the rights to stage the Disney opus, and the production is as good as anything you would see at a theme park or Broadway. In this show every aspect is top grade; the acting, choreography, costumes, makeup, sets, props, and live orchestra. It don’t get much better than this . . .

Directed by Ryan Oliveti, with the orchestra under the baton of Chris Brent Davis, and captivating choreography by Bubba Carr, this production with a cast of 19 highly professional players brings to life the story told by Hans Christian Andersen, the film and the musical play. It is the story of that mermaid who had a desire to become a human as she was enamored of a local prince. But, life is not always easy; and the price she had to pay for an opportunity to achieve her desires is gruesome.

Niki Badua is the young mermaid, and Deb Bowman is the wicked Ursula who holds the key to the escape route for Mermaid Ariel. Chase Peacock is the handsome prince. Everyone plays off everybody else. The King of the Oceans, Triton (Derek Dixon) is a king, but also the father of a mermaid gone missing, and it is a dilemma. A lot of the action is moved forward by the crab, Sebastian (India Tyree) the flounder who starts off the act (Kenny Tran) and Scuttle, the seagull who is played by Austin Tijerina who does fly across the stage on several occasions. You’ll also crack up when Chase Anderson comes on as Chef Louis who is running the royal dinner. But, maybe things could go wrong?

The show is presented against real water on the Grange Lake at Serenbe. And we can take off our hats and salute Brian Clowdus and the cast and crew for using this show to get several messages across. Not only do we all need to treat one another nicely and humanly but we should also be more interested in protecting and preserving the ecosystem; ergo stop tossing all that trash in the oceans.

Their shows are always in open air; but they do have seating, and you can bring your goodies if you wish, and they do have help available for those with mobility problems. If you don’t know where Serenbe is, there is plenty of information and directions at their website, SerenbePlayhouse.com; but get to it. Most of their performances were sold out, but they added some more seating on the beach. If you are 8 years of age or 98, you are going to thoroughly enjoy this one