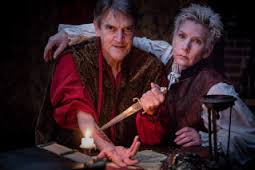 It was more than 400 years ago that Christopher Marlowe penned Doctor Faustus.  It was a story of a man from Germany who had excelled in all the sciences and had some concerns about the creation of the world as he knew it.

Was there really a heaven and a hell?  He would wish to experience them were they to exist.  You can well imagine the reaction of religious leaders of the day, to one who would deny the existence of a deity and/or make a pact with the devil.

This one-act presentation, directed by Jeff Watkins features Chris Kayser as Doctor Faustus and Laura Cole as Mephistopheles.  Faustus summons Mephistopheles from the Devil and makes a written pact with the devil, whereby Faustus shall have 24 years to remain on earth, with Mephistopheles as his servant and magician to do all of his bidding.

The contract with Lucifer is signed in blood, and after two score and four years, Faustus shall spend an eternity in hell.   The underlying question is whether or not there is a deity who can decide prior to a death who shall enjoy an eternity in a heavenly place and who shall forever suffer in a hell.  Do we know if there is any predestination?  Beliefs aside, the question remains unresolved.

This is a short play of about 80 minutes.  We’re told in the play that misery loves company, and fighting the traffic to get downtown early for this one, may bring it to mind.  Show times are 7:30 and because it is performed in the round, and is one-act, in a dark and foreboding manner, no late seating is permitted.  So get there no later than half-hour prior so you can grab some grub and/or a pint or two.   More info at ShakespeareTavern.com