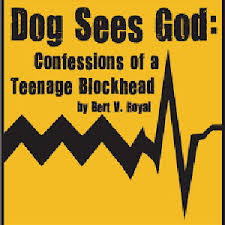 Full title is Dog Sees God, Confessions of a Teenage Blockhead, and while it may be somewhat of a parody of Charlie Brown and the peanuts characters, it certainly is NOT for the kiddies nor for Ms. Prim.

James O. Conner plays C.B. and you can guess from whence those initials came. His dog has died and he is totally in the deepest grief. His sister is played by Madison Smith. The story gets into homophobia when the piano player, Beethoven (Austin Lee Windolph) gets into some situations with Matt (Kalonjee Gallimore). Are either of them attracted or abhorent of the other?

The other cast members are Van and his siter, played by Alex Barrella and Eva Rubin; and Tricia (Madison Cook) and Marcy (Naiya McCalla) who are classmates. To say the story is loaded with expletives would be a modest suggestion. While everybody keeps their clothing on, the references to sexual practices among these teenagers, is quite stage front; as is the use of pot and other drugs. And bullying is a major issue as well as physical development of these youngsters.

Directed by Jacob Demlow, the cast does a good job of bringing this opus to life; but it runs only to July 15th. The play opened in NYC more than ten years ago, to mixed reviews in Variety and other publications. It can also offend many holding fixed religious beliefs on the afterlife. It runs about an hour and 20 minutes in one act. Then there’s time to have a drink and discuss the issues raised.