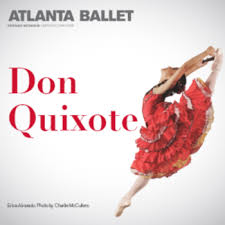 This is one of the finest ballets you will EVER enjoy. And there are but two performance left at the Cobb Energy Performing Arts Center. The dates are Friday and Saturday February 9 and 10.

This is as grand a performance as you would see in London, New York or at the Bolshoi. The cast of dozens of dancers is incredible, and the costumes are total eye candy. Any viewer from 3 to 103 will enjoy this one. The story line is a little weird and while you may get lost in what is happening and to whom, the dance is the thing, as The Bard may have opined.

We see the Don getting a shave from the barber, Sergio Masero-Olarte, and as he later diving into his grand tomes, he meets up with Sancho Panza (Jared Tan) who he takes on as his squire and eventually they take off to explore things with their horse, Rocinante.

The barber, Basilio has eyes for Kitri (Erica Alvarado) the daughter of a local innkeeper (Armando Luna) who wants his daughter to marry to a higher station, such as the comedic fop, Gamache (Jacob Bush)

The ballet has plenty of comedy in it. Sancho winds up doing a great trampoline number in the town square, and Gamache is a hoot as he watches things develop. In Act 2, we find Don Quixote and Sancho in the open fields near La Mancha where his goes nuts viewing the windmills and decides to take action against them. This wonderful performance is directed by Gennadi Nedvigin with a large orchestra in the pit under the baton of Jonathan McPhee. The wonderful choreography is by Yuri Possokhov who had first done this work at the Joffrey Ballet in Chicago; and the great sets and costumes are from The Joffrfey.

The Cobb Energy facility is right near 75 and 285, with plenty of parking and very good seating. PLEASE don’t miss one. We don’t know when it may return, so go get more info and/or tickets at AtlantaBallet.com