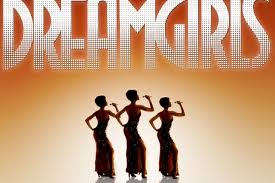 If you were an R&B fan in the 60’s and 70’s then this is one you will really dig. And even if you aren’t an AARP member yet, there are loads of younger folks who are into Rhythm and Blues numbers.

This show was premiered on Broadway 35 years ago, and won 6 Tonys, including Best Musical. But, keep in mind that this music ain’t your grandmother’s Sound of Music. It has often been suggested that a lot of the story line is derived from the lives of The Supremes and what they went through in their careers. However, the creators and producers have always denied that; possibly for legal reasons. But you can decide.

We meet three young women in Chicago who want to get their hour on stage and enjoy the fame and fortune. Effie White (Kayce Grogan-Wallace) is the lead singer in the original trio and is joined by Lorrell (Chimére Scott) and Deena (Judith Franklin). The story is about what happens in show biz. Who will be center stage, who gets the gig in Miami or Vegas, and whose name goes at the top the playbill.

The ladies have to decide if they will sing backup for some male singer such as James Early (Garrett Turner). Then there are problems with booking agents and producers and it is a long and tenuous road to that destination named Success.

Very well choreographed and directed by Ricardo Aponte, the show moves easily through many scenes as the singers belt out more than 2 dozen numbers, with a full band in the pit under the baton of Brandt Blocker. The music really rocks and is amped up like that car with it’s windows open, that stops next to you at a red light when you’re on your phone.

With a cast of 22 and great costumes, including the mandatory sequined long dresses, they move easily and present the numbers just as they used to be, so many years ago at The Apollo Theatre and so many other houses in Harlem and elsewhere. These were the days when it was difficult for a Black performer to hit the big time, even in the Big Apple. And the honkeys weren’t taking the A-train up there so much in them days.

So if this be your bag, you can put those cassettes away, and go get some more info at AtlantaLyric.com