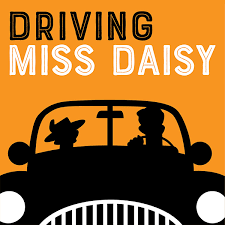 In addition to GWTW, probably the most memorable tales dealing with life in our area have to be the trilogy of works by Alfred Uhry. He wrote Driving Miss Daisy, as well as Last Night of Ballyhoo and then Parade. Each a significant work in its own right.

Georgia Ensemble brought this work to their stage in Roswell recently and now is producing it at the Conant Performing Arts Center at Oglethorpe University. Laurel Crowe who dearly loves this work for many personal reasons, directs a superb cast of three players, who take us back in time.

Ellen McQueen is Miss Daisy, who ages gracefully through decades on stage. She’s a Jewish older woman who really shouldn’t be driving any more. Her son, Boolie (William S. Murphey) insists he can hire a driver for her; even though at the outset she rejects the idea in every way. But, time works wonders. Rob Cleveland plays Hoke, who is a black man hired to service the lady. The two men have played these roles several times before.

The time is in the 1950’s and things aren’t that good for Blacks in our town, nor elsewhere in the South. The keynote event of the script is the bombing of The Temple on October 12, 1958 and Dr. King’s speech at The Temple in the 1960’s.

Hoke and Daisy find that the glue which binds them to one another is far greater than any grit which could keep them apart and they wind up as the best of friends.

The show moves quite gracefully and you really get to feel as if you know each of these three good people; each of whom is somebody you wish you had for a friend today. And it makes us think how sometimes the more things change the more they may stay the same. Just turn on the news any day. This theatre is easy to get to in Brookhaven on Peachtree Road. Plenty of free parking, a safe neighborhood, good views from all seats and you may recall it as the former home of the Georgia Shakespeare Company. More info at GET.org