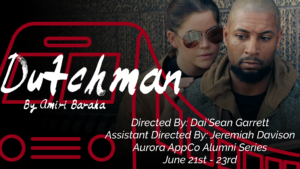 Amiri Baraka penned this one 55 years ago, and I guess it suggests that the more things go, the more they can stay the same.

Dai’Sean Garrett makes his debut as a director for this one act show on the black box stage of the Aurora Theatre. Markell Williams shows up as Clay, a passenger on a subway car in New York City.  He’s a well attired and educated Black gent and he has to deal with a goof-ball White gal named Lula, who comes on to him on the subway car. Not likely to happen on the trains these days.

She admits that she lies a lot, but she also has almost ESP abilities when it comes to sizing people up. Their interaction starts off pretty calm, gets to be sublime, then gets to be a fight to the very end. A third player, Johnathan T. Anderson takes the next seat on the car in a cameo role for a couple of minutes as the show comes to it’s end.

Nobody gets killed in this version, although originally one of them did. The name for the show is thought to be derived from the slaves being brought to this new land by Dutch ships coming into New Amsterdam a/k/a NYC. It is not a show for kiddies nor Ms Prim. Yes, there are a few expletives; but more difficult to deal with is the use of the N-word so many times; regardless of which character is mouthing off.

The cast and crew do a fine job on a difficult short run, short script running about 50 minutes. And, hopefully each will benefit from this one as their careers go to the launch pad.