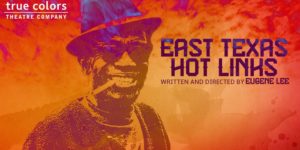 This play is both written by and directed by Eugene Lee. It’s a one act show that dives deeply into the lives of a group of Black folks in some hick town in east Texas. It’s a poor town where the one local drinking hole is owned by Charlesetta Simpkins (Maiesha McQueen) who may be brewing up the hooch herself, just like they still do in many rural communities.

Seven local guys each have their own issues. The issues include seeing a White gal, maybe leaving town to move to Houston for a better job, being overworked and underpaid, and how they need to present themselves. The underlying issue is, of course, the white folks who figure they can call all the shots, even if some of the shots take down a Black person. This is set in the 1950’s and although things allegedly have changed for the better; a lot of what you see and hear makes you think of what you may have seen or read in the news recently.

Eugene Russell, IV plays Boochie, a guy who says he can read people and he sees omens which some fear may be true while others dismiss as being crazy. And Travis Turner comes on as XL, the guy you are thinking might turn on his own, or anybody else, if it were to be to his own advantage.

Wigasi Brant, Gerard Catus, Markelle Gay, Anthony Goolsby and Cedric Pendelton round out the cast of booze hounds. There are ties which bind, but thoughts that loosen ties, and then . . . All hell breaks loose. This is not one for the kiddies, and if your Grandma lived through those days it could be tough for her as well. And, you need to pay very close attention as things develop, for there are often two or more characters speaking/yelling at the same time. The sort of talent that is easier for the ladies than for the gents.