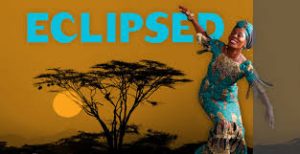 It takes not only talent, but cajones to stage this one.  The play by Zimbabwean playwright Danai Gurira is set in the west African country of Liberia around 2003, when the people had enough of the corruption and terror of Charles Taylor, and took arms against his regime.  This time to succeed and Taylor fled to Nigeria, the corruption capitol of Africa.  After many captures, escapes and recaptures he wound up before a Special Court and is still in a jail in the UK on a 50 year sentence, and still trying to be involved in various African states.

The war in Liberia was tragic.  It was another one of those situations where young men were trained to shoot, where girls were taken hostage and repeatedly raped, sold, and/or enslaved.  In this play most of the action takes place in a hovel in which some “wives” are forced to live.  They have no names other than Wife #1 (Shayla Love), Wife #3 (Charity Purvis Jordan) and the Girl (Asha Duniani).  Parris Sarter and Isake Akanke appear as a warrior and a worker for peace and women’s rights.

Tanashe Kajese-Bolden directed this very stressful saga on a perfect set designed by Isabel and Moriah Curley-Clay.   The play is not your average evening out.  This has a cast of five superb female actors, dealing with many forms of abuse.  And one of the really sad things is that these atrocities have yet to vanish.  Just think of what the Boko Haram have been doing in Nigeria.  In so many places in the world, and more so in Africa, the more things change, the more they stay the same.

This show has received many rave reviews, but has not had very long runs in NYC nor elsewhere.  It is certainly NOT for youngsters, nor those who may adopt the motto of “Don’t confuse me with the facts; as my mind is made up” While the show is referred to as “savagely funny” the laughs are few and far between.  It is a stressful 2 hours which brings to mind so many crimes against humanity in the past century.