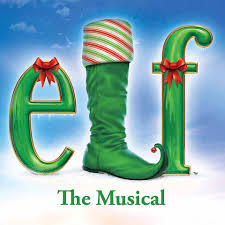 The new City Springs Theatre has brought it’s second Broadway class production to stage, with a large cast, live orchestra, grand set, costumes and dance numbers; in this story about an elf from the North Pole who finds out that he is really a human. The elf (Shuler Hensley) travels to NYC to find his family and therein lies the story.

Elves aren’t that into normal street life, and local folks don’t quite get them. His dad (Steve Hudson) rejects him and has more than enough problems without some elf moving in. His step-mom (Wendy Melkonian) is a little more accepting, considering it is the season to be jolly. Even the young lady, Jovie (Autumn Hurlbert) has trouble accepting this character who really doesn’t have much street creds.

It is Christmas time, and the elf winds up getting sucked into helping at Macy’s, where he manages to screw things up big time. Even Santa (Steve Hornibrook) has a problem with this alien mentality. But the half-brother, Michael (Marco Schittone) is more open to this elf named Buddy.

The show is a musical directed by Steve Bebout, and Brandt Blocker is in the pit as conductor. There are 16 numbers in the show, but not ones that you will leave the theatre humming. For as the Bard would say, the play’s the thing, and with the holidaze upon us, know that all comes out right in the finale. In fact they come off like the Rockettes as the curtain comes down.

This is a new company which is dedicated to bringing first class productions to our community. Next up will be South Pacific in March 2019, and that will be smashing success; especially to those of us who may have seen the original more than 70 years ago.

The venue is easy to get to, just outside the perimeter in Sandy Springs, with a huge garage, good seating and facilities. More info at CitySpringsTheatre.com