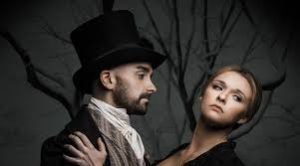 It was around 1830 that Alexander Pushkin was putting together his various segments each written in verse, which were put together and published as Eugene Onegin. It really appealed as a saga for Tchaikovsky who wrote a very symphonic score to which he and noted poet/artist, Konstantin Shilovsky, created the libretto, and it premiered in Moscow in 1879.

It is another one of those love sought, found, lost, regained, lost and lost forever. The lead, Eugene Onegin (David Adam Moore), gets involved with a local lady, Tatyana (Rachael González), who he meets when he accompanies his friend, Lensky (William Burden),to visit his friend’s object of adoration, Olga (Megan Marino).

For these were times when they had to deal with the fact that country folk and city folk were quite different. Not that really has changed so much. On the opening night, David Adam Moore had a medical issue and could not be singing full voice; but he came on doing a lip-synch with Justin Stolz singing at stage right. Stolz also came on as the magician, Monsieur Triquet, performing at a cotillion.

The Opera Orchestra was live in the pit under the baton of Ari Pelto, and they were terrific. The entire production directed by Tomer Zvulun is right up to our current standards, if not even better. As in most operas, the story line is not the real essence of the show. It is great sets, costumes, music, dancing and singing; and they brought it all to the stage.

Yes, somebody does die, but this is an opera. What else is new? Lensky and Onegin get it on in a duel and their friendship finds an unhappy end. But, there are more unhappy meet-ups as the tale goes on. Presented in 3 acts, which run about 3 hours with the two intermissions, and sung in Russian with English super-titles. The opera is staged at Cobb Energy Center near 285 and 75, with plenty of parking and easy to get to. There are but 3 performances remaining, March 5, 8 and 10. More info at AtlantaOpera.org