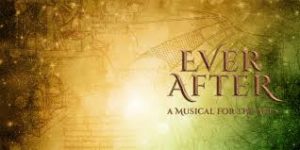 Ever After
Alliance Theatre
through February 17, 2019

Well, if you see this one and think it is Broadway quality, you are on the same page with Susan Booth and the entire cast and crew of the Alliance. Somewhat based on the tale of Cinderella, this is the story as you’ve not seen it before.

No fairy godmother in this one. David Garrison comes stage center as Leonardo da Vinci, and he is the one who helps move the story along. The setting and the character names may get a bit confusing; but everything about this production, acting, singing, dance, costumes, sets, music and story is TOTALLY Broadway staged here in the new Coca-Cola Stage at Woodruff Center

Danielle (Sierra Boggess) is the foster servant-daughter to Marguerite (Jenny Ashman) who has a daughter she’d like to marry off to one of the royal family. Prince Henry (Tim Rogan) just doesn’t really want to be obliged to carry out being a royal. He’d like to escape and live like those townies. But, his parents have a different plan for him. And so the story goes as to whether he will wed a lass presented by an evil woman, or to that poor lass who may have come on as one of a higher station that she hails from.

The show moves beautifully along through many numbers with a live 15 piece orchestra in the pit. The show is one that totally grabs your eyes and ears, and possibly your mind, from the opening scene. The new theatre, just finished, seats fewer patrons than before, but the seats are more comfortable and the throw to the stage seems to be shorter than before.

This one closes in a week, so get more info and tickets at AllianceTheatre.org