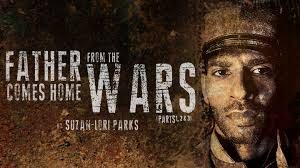 Father Comes Home from the Wars
Actor’s Express
through June 11, 2017

Prize winning Suzan-Lori Parks, crafted this work from the story of The Odyssey, but with a time warp into the days of the War Between the States in the 1860s.

Set in the south, Evan Cleaver plays Hero, a slave who opts to join the Rebs in support of his Boss-Master who has promised to grant him freedom should they survive.  But, the owner has reneged before, and there are other problems which abound.

Rob Cleveland shows up as the Oldest Old Man on the plantation, and there are some others with some classic names, such as Homer (Marcus-Hopkins-Turner) Penny, as maybe from Penelope (Brittany Inge).  The show is staged in 3 acts, named “parts”, although the author had opined that she could envision it running into a 9 parts eventually.  In Part 2 you meet a captured Union soldier (Richard McDonald) and the Rebel Army Colonel (Bryan Davis).  Each of these officers has his own thoughts as to where things are going.

And in Part 3, we find Hero coming back as Ulysses after his faithful dog had found him.  Jason-Jamal Ligon is a hoot as the overly energetic canine.  The cast also includes some slaves who have elected to run away, not knowing of any emancipation proclamations or enactments.

The show is staged on an open space with few props, for it is the story which moves things along.  And, it does draw an audience into contemplation of how far things may have changed and how quickly, since those days.  And, considering where we “are at” these days, what the future may hold for us.

Martin Damien Wilkins has directed this extensive saga, which runs about 3 hours 15 minutes with 2 intermissions.  It is one for those with a sense of history and race relations; probably not for the average youngster, nor some politicians.

Actor’s Express is downtown, easy to get to, with garage parking and valet service available.  More info at Actors-Express.com