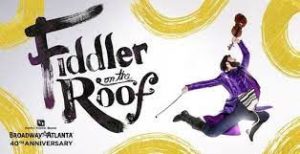 Fiddler on the Roof
Fox Theatre
through November 14, 2021

So what if you have seen the show before? Does that mean you don’t have to see it again? Of course you do. Because it is good for you. No? The Fifth Third Bank Broadway in Atlanta has brought us the gift of bringing this fine touring company to town.

Tevya comes to town played by Yehezkel Lazarov, who is a little different from Topol or Theodore Bikel, but his Tevya is a good Tevya and he has incredible vaudeville animation to make the part over the top whether it is in his dealings with Golde (Maite Uzal) or dealing with the townsfolk; or even the despair that visits him in the final scenes. He worships his G-d; … but would it hurt if maybe things went a little easier for him? Nu?

The eldest daughter, Tzeitel (Kelly Gabrielle Murphy) gets her leave to wed Motel (Daniel Kushner) the poor tailor. Hodel (Ruthy Froch) does get involved with the oddball teacher Perchik (Solomon Reynolds) but not every road is paved with gold as they discover. And wouldn’t you know it that the younger Chava (Noa Luz Barenblat) gets into a relationship with one of the local Gentiles, Fyedka (Jack O’Brien) which is a real no-no in the shtetl of Anatevka.

Act One is a tooshie tester running 100 minutes. Tevya is the stereotype in some ways in that his word is law, . . . except when it doesn’t please Golde, in which case he changes his opinions to suit her. And when he makes a deal for Tzeitel to marry the local butcher, he has to figure a way to explain his change of mind. Especially since the matchmaker will want to be paid for the intro to the butcher. And that’s when he dreams up the dream sequence in which Fruma- Sarah (Rosie Webber) appears in an incredibly balletic scene to put the kibosh on the butcher deal.
Of course, there’s bad times as well, and the pogroms force all the Jews out of Anatevka and as the show grinds to a close and the people are dispersed to Poland, America, Palestine and elsewhere; and we wipe a little tear from our eyes knowing that what has gone before can always come again; and that nature of human beings hasn’t substantially changed throughout the ages. As the French would say, The more things change, the more they stay the same.

The show is VERY well done. The staging, lighting, costumes, music, choreography and performing are all first rate. So, how do we rate it on a scale of ten? Maybe a 9.9? Go see it. It’s good for you. And remember, I told you so. And be aware that the Covid protocols at The Fox may not be as strict as you have seen at some other local houses. As long as you have a mask and a ticket you seem to be OK. But bring your CDC card, license and/or negative test results just in case things tighten up. And with people permitted to ingest drinks or treats in the auditorium, you know that is difficult to do through a mask. Just be understanding, careful and considerate and all should end well.

More info and tickets at FoxTheatre.org/events