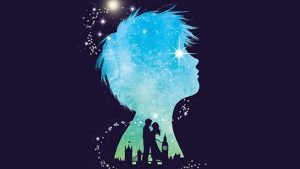 Finding Neverland
Fox Theatre
through May 21, 2017

The musical which deals with how J. M. Barrie came to creating Peter Pan, had a Broadway run of about a year and a half, and since then has been a touring company.

The book is by James Graham and music and lyrics by Gary Barlow and Eliot Kennedy.  There is a fairly large cast of about 35 players, and the costumes designed by Suttirat Anne Larlarb provides the great eye candy for this production.  This is not a Cats nor Phantom; in that the music is nothing you will leave the theatre humming, nor probably recognize if heard without lyrics on a radio.

Twenty six musical numbers are the drive chain that moves the story along, about how Barrie is being pressured to create a new show for a London producer, and the stresses in which he becomes submerged on the trip from nowhere to Neverland.

There is a full orchestra in the pit, and the staging and lighting is Broadway quality.  But, . . . . if you think this is just a spin-off of Peter Pan that will draw in all the youngsters, you may need to rethink it.

It is well done, and even though it has some great youngsters and a wonderful canine actor, it just is not one of those Tony winners that we all cherish and need to see again and again.

Full info and seats at FoxTheatre.org