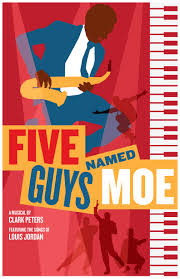 You may not quickly recall the King of the Jukebox, but you’ll recall some of Louis Jordan’s numbers. He was a very talented songwriter and singer and he also could play the sax and the keys.

In this cabaret style performance we meet Nomax (Sterling McClary) who is having some relationship concerns. The five Moes are going to mentor him and work him through things.

The six piece on-stage band has S. Renee Clark on the keyboard and as conductor, with Lorenzo Sanford on drums, Ramon Pooler on bass, Lester Walker on trumpet, Earl Ford on Trombone and James Robinson on the sax.

You will really move along to numbers like Messy Bessy, Let the Good Times Roll, and Choo Choo C’Boogie. As Act I comes to a close you’ll want to join in singing Push Ka Pi Shi Pie, and you may wish to join others who will dance away the act.

You will enjoy great numbers, great performers, and dance steps that will make you gasp when you witness them. They work through two dozen numbers and you’ll enjoy every one of them. It’s a great way to bring down the curtain on this season for the Theatrical Outfit.

But, . . . there’s more . . . Joe Gransden and his band will take the stage for one night only, June 23rd, when they present Lady Day Sings the Blues, with Terry Burrell stage center. More info at TheatricalOutfit.org