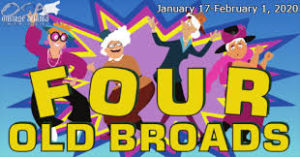 When you see this one, you know that playwright Leslie Kimbell must still love The Golden Girls. So many of us would prefer to spend our few minutes before sleep with their reruns on Hallmark than listening to politicians with their oral bowel movements.

Set designer Scott Rousseau must really have enjoyed directing this laugh fest. It’s set in an ACLF where you meet a rather prim lady (Barbara Washington), a woman who is mostly into being a TV watcher and concerned with her final exit (Bobby Elzey), a retired former stripper (Leslie Holt-Dunn) and a newbie who shows up with an oxygen tank and wearing a cannula (Lory Cox).

A couple of them want to escape the usual days and book a cruise for a week, or more. But, getting all four to want to sign on is not an easy job. In addition to the four old broads there is a former Elvis impersonator (Jpatrick McCann) who has eyes for all the ladies, and now especially for the new one. The facility is being managed by a nasty woman who has something going on as to how she is managing the meds for the gals. That manager (Nancy Powell) is one who behaves as if she were appointed as the Supreme Leader of the facility and the nurse (Michelle Oppedisano) starts off trying to do her job, until she starts to smell something going on.

And going on equals going out, as the Supreme Leader may be involved in some unlawful activity. It is when the four old broads start to dig into and mess around that things begin to arise, and in the end all shall come out right. You’ve met them all if you’ve been on some of the cruises out of south Florida. If I said there were some laughs in the show, I would be grossly understating that. The laughs go on from start to finish and it is a real delight, performed without any commercials.

Onstage Atlanta is located just off E. Ponce near 285; easy to get to except plan extra traffic time if you need to get through malfunction junction where 85 crosses 285. More info at OnstageAtlanta.com