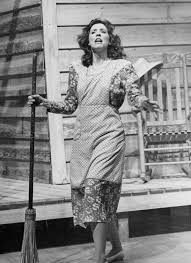 From my Grandmother’s Grandmother Unto Me
Art Station Theatre
through March 6, 2016

Thirty years ago, Clarinda Ross and David Thomas collaborated to draft a presentation about the life stories of Clarinda’s family and her days growing up in Appalachia. They didn’t have a clue that this work would be a career mover; having played in many venues, including some overseas.

Now in 2016 we find Clarinda Ross Gress on stage at the Art Station, which was started by David Thomas who has directed this production. It is a story about stories.

Clarinda moves effortlessly from being Fannie (1870-1938) to Clara (1892-1969) to Willie Sue (1913-2007) to Charlotte, born in 1941, then herself, born 1961. As she moves from one persona to another there are very slight appearance changes but obvious voice and accent changes to portray each of the generations which span more than a century.

The show runs about 90 minutes in one act, and it always amazes me when an actor can remember all those lines, while I have trouble remembering what day of the week it may be. But, she’s a professional Equity actor with years of experience onstage and before the cameras.

The days when a boy grew up, married a girl who lived on an adjacent property and they built their home right near one, or both, of their parents, has long gone. Since the expansion of air travel after WWII, families have become geographically spread out. So the essence of the tale is to inspire the rest of us to try to keep in touch, with one another and with our past.

For tickets and more info: ArtStation.org