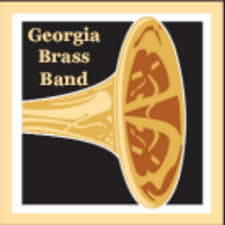 Many of us know what a chamber orchestra is like.  It is a small group that can play in one large room and usually baroque style music.  But, we don’t often come across string orchestras nor brass bands.  But, it can be a delight when you have a group of 29 players, 3 of whom are percussionists and all the rest on horns; some of which you may never have seen before.

The Georgia Brass Band presented a concert at the Roswell Cultural Arts Center as this year’s finale.  If you think of a brass band as the Marine Corps marching band parading down the street playing something by John Philip Sousa, then that is just one part of their repitoire.  The concert this week presented works by John Williams, R. B. Hall and several others, and did have some march passages as well as classics such as Shenandoah and God of Our Fathers.

We must stand and salute these musicians, each of whom is a volunteer.  Ergo, they play because of their individual passions, not for a pay check.  You can find more info about this fine group at GeorgiaBrassBand.com and try to take in one of their concerts next season.  The first one will be September 23 at Mercer University.