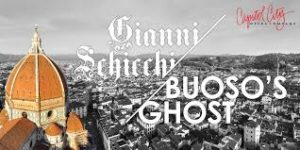 Giacomo Puccini wrote three one-act operas in 1918, and the best known of the three is Gianni Schicchi, which premiered in NYC at The Met 100 years ago. It is pretty much an opera buffa where most things that could go wrong, do so. Buoso Donati is a wealthy gent in Florence, circa 1299. He’s in his final hours and the family is concerned because the existing will doesn’t do much for them. He plans to give it all to the Friars.

The townies are not aware of Buoso’s passing and the family figures they can employ Gianni to pull off a deal where he will pose as Buoso, and instruct the notary and witnesses to write his will just before his “passing.” The gang gets upset when they find that Gianni plans to scam most of the money for himself and they will get a pittance. They’re pretty screwed, as each of them was involved in the scheme and every one of them could be held accountable. It is a sort of warning that when you lie with dogs you may get fleas.

The opera is sung in Italian with English super-titles. And after a brief intermission they take the stage again to present Buoso’s Ghost, also a one-act opera but written by Michael Ching in 1966. This not-often-staged work is sort of a game of Clue. Sung in English and staged in present day appearance; Gianni becomes concerned that maybe some of them helped to poison Buono and that now he might be the next victim. He got some nice treats delivered to him, but learns that you have to be careful what you choose to eat.

Iván Segovia is Gianni Schicchi, and the presentation the cast of 18 others, includes Buoso’s cousin Simone (Christopher S. Connelly), his son, Marco (Michael Lindsay) and Gianni’s daughter, Lauretta (Megan Mashburn), who sings the most remembered aria, O mio babbino caro; a tune you will recall.

Michael Nutter directs both operas and the chamber orchestra at stage left is conducted by Michael Giel. These operas will play only this weekend at the Conant Performing Arts Center at Oglethorpe University. Easy to get to, free parking, and good view from any seat. More info at ccityopera.org