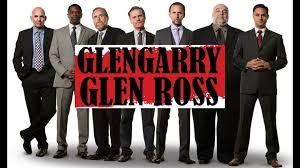 This production of David Mamet’s work is unusual in that it runs through August 26th with the current cast, and then reopens August 31 to September 23 with a totally different cast. Most of the action is set in a seedy real estate office in Mamet’s home town of Chicago, and must have resembled one of those places where he worked in earlier years.

The story deals with some hustlers selling off real estate in two developments, Glengarry Island and Glen Ross Farms. Kind of like when Marco Island and others were being divided up and sold off a half a century ago.

Grant McGowen directs a hard working cast of seven players. You first meet Shelly Levene (Al Stilo) who is scraping the bottom of the barrel, trying to get some decent leads from the dweeb who is the office manager, played by Omer Mughal. After all, if you don’t have leads who are you gonna hustle? Jayson Warner Smith plays top selling agent Richard Roma. Dave Moss (Alex Van) and George Arronow (Andy Fleming) are two more sales reps each with some serious personal self-image problems. None of these guys has any regard for the office manager nor the owners, Mitch and Murray, who we never meet.

But, a couple of them hatch a plot to stage a robbery in which they’ll wind up with all the hot leads and cash in big-time. At least until a police officer (Jennifer Schottstaedt) shows up investigating the more-or-less break-in. One little problem becomes a bigger one when a patsy named James (Marcus LaRon) shows up and wants to exercise his right to rescind the contract he signed fewer than 3 days prior. All hell breaks loose

This is one of those stories in which the “F-word” is used as the universal modifier. Ergo, it is not for the kiddies nor Ms. Prim. But, it is real folks, in real time, in real dealing. These sales reps could also have been used car dealers or politicians.

The show has been playing to full houses, albeit the venue seats only about 50 patrons. But, more info and tickets at pnotheatre.org