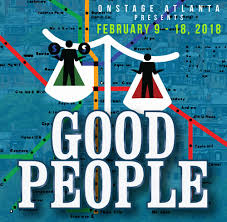 David Lindsay-Abaire has set this play in his old hood. He grew up in Beantown (a/k/a Boston) and while the metro area is made up of more than 4 dozen independent towns and cities, and is one with many cultures; it was one which was also very segregated. The Asian community was downtown, the Italian section was the North End, the Irish were mostly in South Boston while the hoi-polloi lived in Back Bay, Beacon Hill and started the migration westward through Brookline, Newton and Wellesley. So he pulls together a lot of the characteristics of lives in Southie.

Jeffery Brown got a good cast together and they do come off with pretty good Bahstin accents, even if they can’t pak their cahs in Harvid Yad. Margie Walsh (Melissa Rainey) is working at a Dollar Store but she has some problems with showing up for work, and her friend, Stevie (Michael Sanders), who is the manager has to can her. So she starts off in her search for some new low-level employment.

Stevie wants to be of help, but his resources are severely limited. Life wasn’t easy, living from paycheck to paycheck, and not being on food stamps. Bobbie Elzey and Cathe Hall Payne are a couple of Margie’s BBFs. They all grew up together, and they spew out whatever comes to mind, using the street lingo that made Amy Schumer a hit.

One of her old classmates was Mike (Alan Phelps) who managed to finish high school, went on to college and escaped from Southie when he became a physician. Now, he lives in a posh area in the burbs and is married to Kate (Marquelle Young) who is from a totally different background.

I don’t like to give away secrets of where a show is going. But, the playwright has quite a skill for enveloping pathos in a skin of hilarious exchanges. And this one ain’t no different. There are good people who want nothing other than to be good for themselves and others; yet sometimes may be seen as not being quite such a goodie. Margie and Kate each have a child, although we do not meet them. But we do delve into past and present relationships as the tale unfolds.

Sometimes you can anticipate the next line, such as when four of them are at a church bingo game and one of them yells Bingo. Well staged production with very entertaining actors. Nobody gets beat up nor killed, but there is plenty of screaming in Act II, so just deal with it.

This one is being performed on main stage at 7 Stages in Little 5 Points. Parking is a bitch, so get there early. More info and tickets at OnstageAtlanta.com