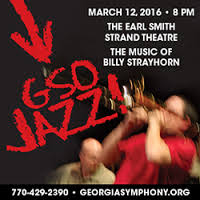 The Georgia Symphony small jazz band, took the stage on March 12th at the Strand Theatre on the Square in Marietta. This was not the big jazz band, but the six member type of band that you recall seeing in various clubs around town, or where you grew up, decades ago.

The concert featured the music of Billy Strayhorn, the gifted composer who did a lot of work with/for Duke Ellington. His career was cut short at age 51 by a cancer, but some of his many works live on.

The band on stage featured Mace Hibbard on sax, Trey Wright on guitar, Randy Hoexter at the keyboard, Tim Aucoin on bass and John David on the drums. Sam Skelton on his sax is the lead for the band, and they also brought on vocalist Karla Harris.

The music of Strayhorn may resonate with those who are true afficionados of The Duke, but probably the only truly memorable one that most folks will recall is Take the A Train, which he wrote relating to the way to get to Duke’s pad in Harlem.

But, the band did two sets with 11 different numbers and they play in the time honored classic jazz combo manner, where after the opening, each member of the band gets to do his own riff.

The concert was very energetic and everybody left with a smile on their face. Next time around, when they play at The Strand, take an easy ride to the Square, free parking in municipal garage across the street and plenty of places to chow down before and after. Keep up with the GSO at their site: GeorgiaSymphony.org