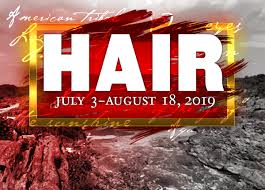 First thing you need to understand is that this is a period piece. Hair hit the boards in 1968 during the Viet Nam debacle and all the civil unrest of the mid 60’s. The show takes place in lower Manhattan and is a bunch of flower children who are searching for the meanings of their own lives on this planet amidst the apparent insanity of the world around them. But, to that world they come off as the insane ones.

A cast of 19 players and a 6 piece on-stage band play to a small and intimate audience in the meadow; doing 39 roaring numbers, of which the only ones most of us recall are Hair, Aquarius and Good Morning Starshine. It really makes one think of Woodstock and Haight-Ashbury days.
But, here we find ourselves more than fifty years later still in the quagmires of wars where there is no real winning. And therein, I guess, lies the connection to the present day. There is some frontal nudity, which you really don’t see much of, and some single entendre comments, but it is not the essence of the story at all. What it did bring to mind is a quotation from George Santayana who said “Those who cannot remember the past are condemned to repeat it.”

There basically is no set, per se, as it is all about the music. The players are over the top as to working the house. They’re running up and down the aisles in some numbers and speak directly to the audience. It may not appeal to some folks who lived through those years and/or suffered losses to their families; and it may be tough to interpret it for youngsters. It definitely is an unique work and you either like it or not, as these young folks deal with their identity, sexual orientation, racial background, draft status and acceptance into the society of their days.

This is a really good cabaret style production of this rock musical about hippies, directed by Brian Clowdus, with choreography by Bubba Carr and with the band under the baton of Ed Thrower. Two extra special things about the performances through July 21st, are a special appearance of Braden Chapman in drag as Margaret Mead, and the theatre company’s tribute to Bob Farley who we all knew from his days at Georgia Ensemble, but didn’t know that back in 1968 he was brought on board as part of the artistic team for the first touring company of Hair. He is still with those of us who appreciated his work and devotion to good theatre.