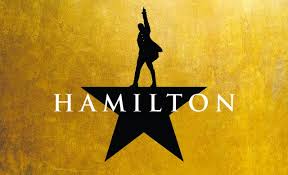 A young illegitimate man from the Caribbean island of Nevis, somehow managed to emigrate to the young developing nation of Unites States of America. He was a pretty bright gent who became an army Major General, the Treasurerr of the United States, and held many important posts.

When the Federalist Papers were written, to set down the rules and interpretation of the Constitution, he authored 51 of the 85; and his interpretations are a basis of many rulings to this day.

The musical has been playing to totally sold out houses in NYC at ticket prices that would have made Hamilton, Ben Franklin and Thomas Jefferson laugh their wigs off.

Lin-Manuel Miranda created this with dozens of collaborators. The cast of 20 players and an orchestra of 10 run through 34 numbers in 2 acts. Austin Scott plays Hamilton, and Nicholas Christopher plays Aaron Burr his friend/enemy. There’s a lot of loud speaking, fighting and some dancing; and the prime comedic output is from Peter Matthew Smith as the weirdo King George II, who figures we’d fold and return to his reign. This touring company of maybe 75, or so, work under the direction Thomas Kail.

The music is probably nothing you will leave the theater humming, and most of the lyrics get run over by the action as it progresses. It is not Cats or Les Miz in that regard. It is styled as a musical, but many may see it as a rock opera. One thing that would help is for you to brush up on your knowledge of Hamilton, so you will be more tuned in to where and how things are going. Then you won’t be surprised when he is challenged by Aaron Burr to a duel and he gets offed by him in New Jersey on July 12, 1804. He passed at what we’d deem a young age; but having achieved more than most humans ever could.

It is playing to full houses, so if you snooze you lose . . . .More info at FoxTheatre.org