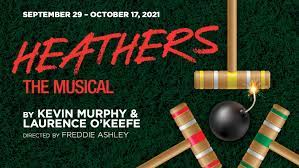 This rock musical is being staged as a co-production with Oglethorpe University and being presented at the Conant Performing Arts Center. Be forewarned that this is NOT your grandmother’s musical, nor one for the kiddies who have yet to figure out what WTF means.

Directed by Freddie Ashley with a cast of 27 players, the show belts out 26 high energy numbers, some of which are in chorus while some are one or two characters digging into their inner selves, as they go through life in an Ohio high school. It’s 1980s, and the girls are learning how they can use their talents to get everything they want. Three of them are each named Heather and they are like an elite clan. A lot of the story relates to a loser named Victoria who wants to move up the social scale but does some inappropriate acts, some of which result in disasters.

For this is a black comedy that deal with drinking, dating, suicides, murders, bullying, homophobia, and sexuality. As such, it certainly isn’t for Ms. Prim or the Bible Thumpers. The set is Broadway quality and a live band is offstage under the baton of Alli Lingenfelter. But, the score isn’t the kind you leave the theatre humming, nor recalling the precise words; as it is like an Opera Noir where the story is moved mainly by the numbers.

Regardless of some concerns, it remains a favorite of many folks, and the Conant is a very easy venue to get to with free parking and good seats each with a good view. Know that you will have to show your CDC cards and wear your mask when in the facility; but that’s just the world we’re living in these days.