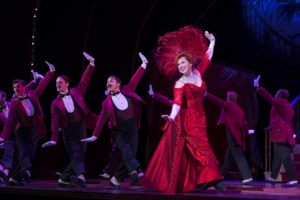 I doubt that Thornton Wilder ever imagined the fame and endurance that Dolly would enjoy. If you have never seen it, you need to get to the Fox, and if you have seen it, you will want to enjoy it again as it never fails to excite. Carolee Carmello is Dolly Gallagher Levi and her stage presence is the same as every one of the top stars who have played Dolly. She’s the yenta from Manhattan who wants to marry that old coot from Yonkers, Horace Vandergelder (John Bolton, the actor not the one you see daily on the news). Horace has something Dolly admires, and it’s in his wallet.

Daniel Beeman and Sean Burns are the two young guys slaving away in Horace’s store, and they get the action going when they decide to go for a romp into the Big Apple. As you know, all which can go wrong will, until things come out OK in the end. In Act II the milliner, Irene, and Horace’s daughter and her suitor, and the lasses the lads become tight with, all wind up at that posh beanery, The Harmonia Gardens. That’s the incredible scene where Dolly makes her famous entrance down the stairs to the welcoming song from the waiters and staff who are so glad to see her back where she belongs.

The choreography of all the staff is such a spectacular highlight of the show, as more than a dozen dancers wow the audience doing The Waiters’ Gallop number. You don’t want them to stop. As the show starts to close down you really don’t want to sing So Long Dearie to any of the performers. The costumes are like the original Broadway ones, the props and screens and the Hay & Feed shop in Yonkers are really spot-on, and the full orchestra in the pit, under the baton of Ben Whiteley are a delight.

The touring company is a very hard working gang. They’ll play here through the week and then hit the road for Philadelphia where they’ll open again after 1 day off. So now’s the time for you to decide that it only takes a moment to get your tickets and celebrate with a night you’ll remember. More info at FoxTheatre.com