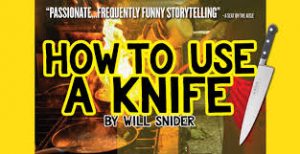 Will Snider brought together his academic studies with some years of working in East Africa and his love of theatre to create this very unusual work.  I loved how the program has a warning on the cover that there is some spicy language.   As if the “F word” hasn’t become the universal modifier in these days.

The one act play runs almost 2 hours and is set in a small restaurant in Manhattan.  The owner, Michael (Brad Brinkley) is trying to save the place and brings in an old colleague, George (Brian Kurlander) to head things up as chef.  The entire show takes place in the kitchen of the bistro and it is quite an accurate set created by the sisters Curley-Clay.

There are a couple of Latino guys working in the kitchen.  They are Carlos (Tony Guerrero) and Miguel (Orlando Carbajal Rebollar).   They do speak mainly Spanish, but you’ll get the gist of what is happening, even if you haven’t spent much time in Miami.   There is a pretty tight lipped black gentleman (LaParee Young) who is the dishwasher and the young kid who is serving dishes and bussing is Jack (Jeremiah Parker Hobbs).

The show starts off as mainly the usual expected problems and interactions of the staff on a typical day; but things start to get eerie when Kim (Cynthia D.  Barker) shows up.  She’s a government agent on the hunt for somebody, and you start to figure out which one of the guys it might be.

Underneath all of the present day stress and humor, there lies a story about what may have gone on in the social warfare between the tutsis and hutus in Rwanda some years ago.  And this also makes one think about what is going on in this world today.  For it was said by George Santayana that those who cannot remember the past are condemned to repeat it.

Directed by Carolyn Cook, this is a pretty long one-act gig, but it does draw you in, and the show does not work out just as you might have imagined it might.  For more info go to HorizonTheatre.com