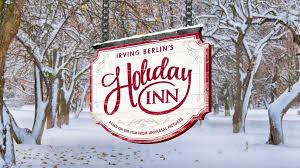 Based on the 1942 film, this play by Gordon Greenberg and Chad Hodge incorporates the original music by Irving Berlin. Jim (Nicholas Rodriguez) and Lila (Samantha Sturm) are performing a dance number at a NYC club with Ted (Tyler Hanes) when Jim proposes to Lila and she says yes. But, some stress comes in when Jim says they should leave the Big Apple to head up to a farm in Connecticut that he bought and give up show biz. She’s not quite ready for that, and takes off on a tour with Ted.

The story is about personal involvement in filling one’s dreams; whether they be about hitting the boards on stage, or repairing the boards that are falling apart on the old farm house. And, maybe one solution might be to turn the property into a place where there could be entertainment as well as lodging. Unlike a cruise ship, it would only sail on the holidays when plenty of folks would become visitors.

Directed by Greg London the cast of 19 professional players run through the singing and dancing of 20 of Berlin’s numbers which eventually help you to see Blue Skies when it is time for a White Christmas. Great set, costumes, choreography and a live orchestra in he pit under the baton of Brandt Blocker. Another Broadway quality production right here in Sandy Springs. And if the weather is lousy, just use the valet parking service right at the main entrance.

So have yourself a Hollie Jolly Holiday and get more info at CitySpringsTheatre.com