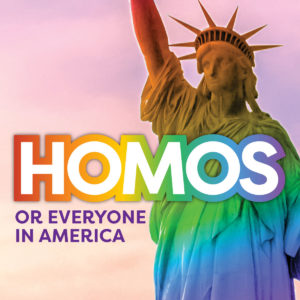 HOMOS or Everyone in America
OutFront Theatre
through May 21, 2022

OK, let’s start by acknowledging that this one is not for the PG13s, nor the Prims who might be offended by the constant use of the universal modifier starting with F. The show does have issues with homosexuality, and how it may most often just mirror hetero relationships.

It is set in Brooklyn maybe 15 years ago, and is staged like a small cabaret show with some patrons actually sitting onstage. Directed by Mandy Mitchell, this regional premiere brings four players to stage. Tyler Sarkis is a writer, whose actual name is never an issue; and he is in and out of relationships with an Academic played by Niko Carleo. They are the leads in the show and the time line moves back and forth as they examine the meanings and effects of love. They do run into some problems with the third contact who is Dan, played by Angel Fabián Rivera. Si Chen comes on as Laila as the show moves from time past to today to days gone by and days to come.

The play by Jordan Seavey has played in several cities and been well received by the audiences for whom it is promoted.  The show runs about 2 hours with intermission and the theatre is easy to get to downtown, with easy parking, comfy seats and nice goodies. More info and tickets at OutFrontTheatre.com