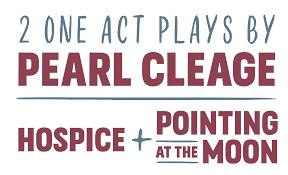 Hospice + Pointing at the Moon
Alliance Theatre
through April 15, 2018

These are two one act plays by Pearl Cleage, which delve into the lives of two women at different stages of their lives.

In Hospice we find Alice Anderson (Terry Burrell) who is in the final stages of her life. She has come back from Paris after many years to live with the daughter she abandoned to pursue her career abroad. The daughter, Jenny (Tinashe Kajese-Bolden), has vacillating feelings as she is also with child and due to deliver soon. The two women discuss their lives in general and in depth.

After an intermission the second play, Pointing at the Moon, comes to stage at the same home, but with a lot of interior changes. Jenny is now many years on and is now played by Terry Burrell. She’s visited by her neighbor-friend, Isabel, who is played by Tinashe Kajese-Bolton. The passage of those years hasn’t always been an easy trip and they are discussing the recent death of a gent they knew well. And it reflects upon the facts that when one is young they may seem irrelevant to others, yet when they get on with age they also seem the same way.

That’s life for so many of us. We weren’t closely attached to our grandparents and yet as we become them, we experience the same situation, but from a different perspective.

These two actors do a fine job in these works directed by Timothy Douglas. This is one of the Alliance’s on the road productions while their renovations are being done at the Woodruff Center. These plays are presented at the Southwest Arts Center on New Hope Road. This is where Kenny Leon’s True Colors Theatre calls home. Just west of 285 off Cascade Road (Exit 7). More info and tickets at AllianceTheatre.org