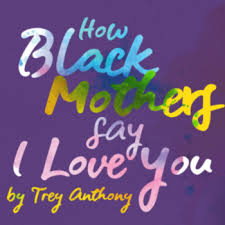 How Black Mothers Say I Love You
Horizon Theatre
through August 26, 2018

Trey Anthony’s new play has generated many good reviews wherever it has played. Her previous opus, ‘da Kink in my hair, has won great acclaim, and was also produced at the Horizon theatre last year; directed by Thomas W. Jones, II. It deals with family relationships and schisms as it deals with the tale of two daughters who were left for six years while their mother emigrated to make the money and the future for them that she felt they deserved.

Dr. Yvonne Miranda Singh plays the mother, Daphne, who left her two girls in Jamaica when she went off to New York. Now she is in her final days and the grown daughters are visiting her in her Brooklyn home. Valerie (Wendy Fox-Williams) has serious feelings of what is right and wrong. Daphne is a church-lady and Valerie tries to accommodate and understand her desires; while sister Claudette (Minka Wiltz) is of a slightly different mood. She has her own life problems and is living in Canada, and is certainly not into going to church.

There was a third daughter, Cloe, the daughter of Daphne’s second marriage, who died at a young age and she shows up only as a ghost in the memory of her mother. Cloe is played on different days by both Riley Charles and Vaunna Gower, each of them being talented dancers and actors.

The superb set is the work of Moriah and Isabel Curley-Clay, who are always great in their work, and the show moves along easily with great costumes, props and lighting. It is an easy one to understand if you have a family. There are times when one may feel connected, then disconnected. But is it not possible that if one were to look up the word “dysfunctional” in the OED that it might say “see Family”

The show runs about 2 hours in 2 acts, and there is free parking at their facility in the south section of Little Five Points. Many performances are selling out, so get more info and tickets at HorizonTheatre.com