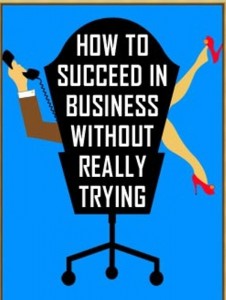 How to Succeed in Business, Without Really Trying

When Abe Burrows and Frank Loesser put this show together more than 50 years ago, it was a very successful musical based on a satire about how a young wanna-be could worm his way into a large company and work his way up to the top level. It was somewhat derived from a book penned by Shepherd Mead, a chap who had entered the advertising agency business and started off in the mail room of an agency in NYC. Ergo, that’s where his lead character, J. Pierrepont Finch starts, taking his directives from a manual on how to succeed. This predates the Idiots’ Guides and the “How To” series for Dummies. His former associates were probably miffed when he had an ad agency in the show named as BBD&O, which is how the world-wide Batten, Barton, Durstine & Osborn Agency is usually known. The show ran originally in NYC for 4 years and won dozens of awards.

While the musical numbers are not all quite as memorable as some others by Loesser, you will recall The Brotherhood of Man and Company Way. Director Myrna Feldman has brought a large cast of players to the stage. Billy Valentine on the keyboard provides the live music for the show. Loren Collins comes on as Finch; and having been a nerd on stage before, he knew just how to be Finch and handle the corporate self-interests which abounded him.

Bud Frump (Justtyn Hutcheson) is the nephew of egotistic uncle J.B. (Jerry Knoff), who is the CEO of the World Wide Wicket Company. Bud is always using family connections to advance and protect his career; while J.B. may have some other interests; such as various secretarial women. He is drawn to Hedy (Ariel Kristen Kasten) who he has brought on board although he has plans to have her elsewhere from time to time. Everybody with a suit and a tie has his own agendum, and not unlike politicians, one can not rely on every word which comes from them.

This local theatre is located just off of Norcross Square at 10 College Street. They play Fridays and Saturdays at 7:30 and have a 2pm matinee on Sundays. Easy to get to, free parking, and can you believe they want to provide you with delicious home-made desserts at intermission? And the tickets prices are a bargain. Check them out online at LionheartTheatre.org