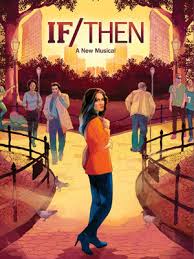 IF/THEN is a fast moving musical with music by Tom Kitt and lyrics by Brian Yorkey. The show premiered in 2014, had a run of about 400 performances, garnered several Tonys and possibly closed at a loss.

In this touring production the lead of Elizabeth is played by Jackie Burns. She’s a woman in her 30’s who has just survived a divorce and moves to New York to find herself. And therein lies the plot. For when she is playing as Beth, she is her old self, an urban planner. Her old friend, Kate (Tamyra Gray) suggested she follow the career path when she introduced her to Lucas (Anthony Rapp) who is a community organizer.

But later she seeks the road not before traveled. She is Liz, seeking romance. That was where and the roads diverge, ala These Woods I Know . . . We don’t know where this is going. For Beth is on the professional ladder and climbing up, Liz is more into messing with Josh (Matthew Hydzik) a returning soldier, and Anne (Janine DiVita). Nothing seems to work out as one might expect.

When the show opens it is a very stark set which looks like an elevated walkway and nothing on stage level. And while the set may seem that way, it actually works very well as it moves in and out and around to be various offices and flats, and the rear screen projections, which are now so often used, really bring the stage to light. The costumes are just average street wear, and the music is somewhat intriguing; but I doubt you will leave the theatre humming any of the tunes, nor recalling the lyrics except a few lines from numbers such as I Hate You and WTF.

It isn’t a show for the kiddies or Miss Prim, and if you have a hearing problem you need to be advised that many of the 22 numbers are quite fast paced and loud. It isn’t like the grandmother’s musicals with crooners stage center. It’s often yelling to a score. Some of the viewers thought it was more of a chick gig, as the women more easily related to the principal character trying to find herself. It is sort of a paean to the concept that life is what happens as we wait for our plans to work out.