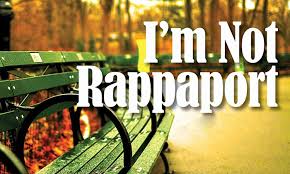 Herb Gardner’s play has been a standard for the past 30 years. The old geezer sitting on a bench in Central Park and yakking away at the janitorial worker who would prefer some solitude.

What is truly amazing about this production in is that the two leads are the same two actors who played these roles 27 years ago at the Theatrical Outfit. Kenny Raskin is Nat, the old guy who keeps re-inventing himself on a moment’s notice; while the unfortunate Midge is played by Rob Cleveland. They absolutely “own” these characters, and nobody could do a better job, including some devastating looking prat falls.

Dan Triandiflou is the protagonist in Act I, as he is on the board of the co-op and has to try to lay off Midge. That’s when Nat comes to the rescue attempt as his attorney. They’re both getting on in years, and as I so often say; these golden years can often feel more like brass. Midge isn’t ready to take the severance package offer, and Nat isn’t ready to go into some senior living center.

Nat’s daughter is played by Wendy Melkonian, who is clearly worried about her dad. Nat quickly makes up a phoney story about emigrating overseas with a young woman he is involved with. One problem is he has to find somebody to show up and act as his intended. That’s when he finds that Laurie, (Brooke Owens) who is an aspiring artist but has been smoking weed, is being threatened by some character who calls himself The Cowboy (Marcus Hopkins-Turner). So he steps up to recruit her and face off against this thug. He also tries to calm down that young man named Gilley (Benjamin Davis) who feeds off these old folks in the park by running an odd sort of escort service.

David de Vries has directed this hilarious work which is staged on a great set by the sisters Isabel and Moriah Curley-Clay. I don’t care what your family is like; there are things you’ll find so relevant. It’s about families, what we have lived through and what we may be seeing on the road ahead.

For more info visit them at AuroraTheatre.com