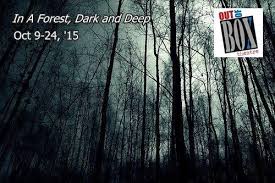 In a Forest, Dark and Deep

Out of Box Theatre

Neil LaBute has written several plays, each of which seems to delve deeply into the human spirit, and often showing the errors of our ways. This work is certainly not a relaxing evening of the usual sibling interactions.

It is a two act play with two actors who engage one another at extraordinarily high energy levels, including the use of many expletives as the universal modifiers in just about every sentence which gets aimed from one to the other.

John Stanier stepped up to the plate when a casting change had to occur and in eight days managed to learn every single line of more than two hours playing time. He is Bobby, the brother who gets called upon to help out his sister when she needs to get a lot of stuff removed from a little cabin in the woods. The cabin had been a trysting venue, and she is the Dean of her college and has some secrets she needs to obscure from view.

Aretta Baumgartner is the sister, Betty, and in the small town where they live, she has a reputation on the street akin to that of Blanche in The Golden Girls. Something drastic has occurred, and it isn’t fully laid out in Act 1. For Betty tends to mask facts as she goes along the path of life. On the other hand, Bobby tends to be crude and hard nosed about a lot of things, especially dealing with normal standards of morality and ethics.

With a good set by Joel Coady and under the direction of Kara Cantrell, these two actors do a first rate job with a story that may not share the same appreciation. It is not for the kiddies, nor for the Church Ladies; and it is one of those that having seen it once, you’ve seen it.