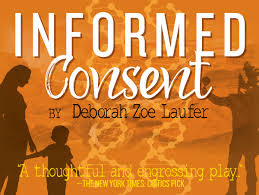 This new work by playwright Deborah Zoe Laufer is in it’s premiere season, having opened in NYC within the past couple of months where it received much acclaim. The underlaying basis of the story is science versus religion, and how we may perceive of what is most valuable.

The scene is set at a university in Arizona where a researcher is studying genetic links related to various diseases. She works alongside a social anthropologist who is deeply involved with a dying off tribe of Native Americans who have always lived in the Grand Canyon.

The story is derived from real life, when the Havasupai People sued to prevent the use of their blood samples to study things such as mental illnesses. The samples had been obtained allegedly only to study their DNA to see if they could find a clue how to curtail the diabetes which was decimating the tribe. The university was banned from entering upon their land, and finally agreed to pay out $700,000 in damages and return all blood samples.

The underlaying problem is that this isolated tribe of fewer than 700 remaining members, held a religious belief that their blood was sacred. And the researcher, Jillian (Bethany Anne Lind) after having each donor sign off on an Informed Consent CYA document, figured she had the right to deal with the specimens as she thought most productive.

And therein lies the problem. Jillian is a very dedicated woman. And there are things she doesn’t care to lay on the table. Her mother passed away in her 30’s from Alzheimers, and she also fears that her young daughter may have a gene which could some day imperil her life.

Jillian’s husband or mister-mommy is Graham (Neal A. Ghant). The only member of the tribe which speaks English is Arella, played by Diany Rodriguez. Jillian has no other door into the tribe than to use Arella as her front. And that puts Arella on a hot spot. Jillian’s colleague, Ken (Carey Curtis Smith) is really ticked off as well, for he has spent decades working into the tribe to gain acceptance, since is not one of their home boys. Tonia Jackson plays the university Dean who winds up having to use her hammer to nail things down.

Lisa Adler directs a cast of five players in this work with a nice set and some nice projections and plenty of hard work by the cast. But, I’m not sure this one is for everyone. I don’t see youngsters digging it, and while I am a few years past their age, I was watching the first act and wondering WTF is going on. I can tell you, that a lot of the side comments in Act 1 are the inner thoughts of Jillian’s being given voice by the other cast members. It comes off as a play within a play. Then in Act 2 all comes around to what is going on and what will happen.

The science vs. religion thing is there. And those of us who have dealt deeply with family health issues would agree that often times a little knowledge is a dangerous thing. I guess the bottom line is that life often is what happens while you wait for your plans to work out. For more info and tickets visit HorizonTheatre.com