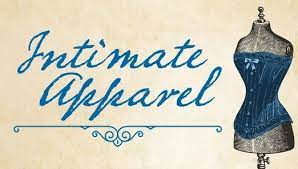 Intimate Apparel is a play by Pulitzer Prize winner Lynn Nottage, who really knows how to dive into people’s inner selves and deal with social interactions. In this work you meet up with a seamstress who specializes in crafting undergarments for the upper crust in Manhattan in the early 20th century.

The seamstress Esther (Vallea E. Woodbury) is working from the room in a boarding house run by Mrs. Dickson (Terry Henry). Mrs. Dickson is going off to a party and would like Esther to join in, and maybe meet up with a gentleman there. But, that doesn’t work out as hoped for. Meanwhile Esther starts to receive letters from a guy who is working on the Panama Canal project; but she has to have others read to her as she is illiterate. The worker, George (Marcus Hopkins-Turner), does appear on stage to tell us what he said in his notes; and he finally does appear in person. He isn’t quite the best bet in town. And he may be trying to take advantage of Esther.

There are other situations as well, like when Esther is getting into things with Mayme (Valeka Jessica) who is a sex worker. And she buys fabrics from an orthodox Jewish dealer, Mr. Marks (Ross Benjamin). They obviously have interests in each other, but his faith intervenes, so it can not work out. You also meet the classy Mrs. VanBuren (Candi Vandizandi) who is Esther’s upscale client.

Directed by Ibi Owolabi, the cast moves the show along so very smoothly, and draws you in from the opening scene. Things don’t exactly work out as the characters may have wished for, but you will follow them along the road to the finale.

Actor’s Express is easy to get to, with adjacent parking lot. You still need to show your CDC card, or a negative test result, and masks are worn. Running time is a little over 2 hours with one intermission. More info and tickets at Actors-Express.com