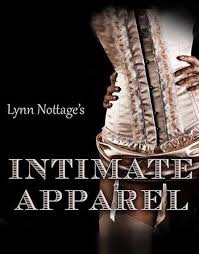 This show is about folks trying to find and/or deal with their lives, set in New York around 1905. It was a time after legal slavery was abolished, but employment as an industrial serf wasn’t. A young seamstress named Esther (Jessica Briana Kelly) has managed get work her way up to NYC from someplace in the Carolinas. She is hard working poor young woman, who lives and works in a boarding house owned and run by another black lady, Mrs. Dickson (Lisa Carr) who has had her as a tenant for quite a few years and really cares about her.

Esther gets into a pre-internet day’s long distance relationship by mail with a man from Barbados who is working on the Panama Canal project. He is George Armstrong (Rahshaun Cormier) and neither he nor Esther are quite literate. They get notes written and translated to one another by third parties, who seem to know a lot more than one might wish for them to know.

You also meet an orthodox Jewish fabric trader, Mr. Marks (Perry McWilliams), who cares about Esther as a customer and as a person; albeit he must be extremely observant of the reasons why he must always step back; for he is to be wed to a bride he has never met. Sort of a Fiddler thing. The cast is rounded out by Keeta Bell who plays that harlot, Mayme, who gets paid $2 for a trick and treat; and that well-to-do white lady, Mrs. Van Buren, played by Holly Berger.

Myrna Feldman directs this very energetic cast in a story that you may kind of think you may know where it’s going; and everything may not be an easy walk. Yes, George takes advantage of Esther in ways emotional and financial, and lots of times folks aren’t always as they may appear.

But, in the end it is about people, who are people, and how we may try to face up to various forms of distress as we plow through life. This is a well done play, not one for the kiddies. Lionheart performs only Friday, Saturday and Sundays; and there is more info available at LionheartTheatre.org   The venue is easy to get to just off the square with plenty of parking, and they are soooo nice, they even want you enjoy some complementary goodies at intermission.

And once you check out the area, you may want to think of heading back there on December 6th, when Joe Gransden brings a small band and singer, Robin Lattimore to the adjacent dance hall.