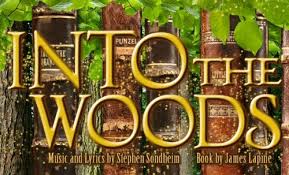 Into the Woods
Aurora Theatre
through April 17, 2016

Into the Woods, with music and lyrics by Stephen Sondheim and based on James Lapine’s script hit the stage about 30 years ago, and has played around the world since then with some adaptations and has won loads of awards. And in 2014 it came out as a film and grossed a bundle more.

The Aurora Theatre is VERY good when it comes to producing musicals and this is no exception. The show runs almost 3 hours with one intermission. And, the set is unlike any I have seen for this show before. They start off in a library where a young lad (Evan Jones) starts the narration of this blend of several fairy tales.

With a large cast of 18 players, each in a super costume, they deliver up 30 numbers as a wicked witch (Natasha Drena) starts the action going when she demands 4 things from a poor baker and his wife, if they wish to become parents. Wendy Melkonian is the baker’s wife and does a great job as does each and every cast member.

Caroline Arapoglou is poor Rapunzel with the long hair, and you also meet Little Red Riding Hood (Shelli Delgado), and Brody Wellmaker and Christopher L. Morgan as a couple of princely guys. Cinderella is also in the show, played by Diany Rodriguez.

Directed by Justin Anderson and choreographed by Sarah Turner Sechelski, the show moves along quite easily. The music is provided by a live band under direction of Ann-Carol Pence. They’re onstage but high up and out of sight during the show.

The Aurora is easy to reach in Lawrenceville, with plenty of free parking and plenty of beaneries nearby. Times and tickets at AuroraTheatre.com