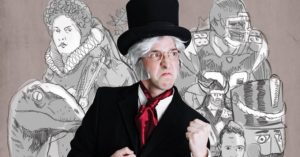 They’ve done it again . . .Who else could stage a show with a substantial cast and a full script, and then let different unscripted characters invade the show in each performance. The uninvited visitors are not known to the scripted actors and so once the invasion occurs they have to make up their own story lines and actions to deal with it.

And it is a hoot. The Scrooge you see isn’t the Scrooge you and your kids know. In fact, this is not for the kiddies, but for open-minded adults who would like an evening of enjoyment with plenty of single entendres. Matt Horgan directs this year’s version which also features various characters played by Andre Castenell, Anna Giles,Liz Grofic, Perry Frost, Clint Sowell, Joshua Quinn and Amanda Lee Williams.

Yes, it does have a Tiny Tim and a Fezziwig, and as expected, Scrooge thinks a holiday such as Christmas is a pure humbug. But there’s plenty else that’s new in this one, as the main cast has to improvise to deal with some invader they didn’t know was coming until about 5 minutes before curtain time.

Dad’s Garage is located in a former church on Ezzard St, down in the Old Fourth Ward. You can get online driving directions. Plenty of free parking and come early to enjoy the concessions area with cabaret style seating. This one runs about 2 hours, which includes an intermission.

And they often have an improv show which follows, and you are invited to hang in for more laughs. More info and tickets at DadsGarage.com