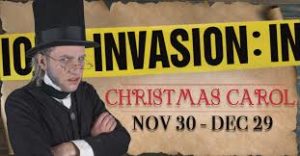 They’ve done it again, again, again . . .and who else could stage a show with a substantial cast and a full script, and then let some different unscripted characters invade the show in each performance. The uninvited visitors are not known to the scripted actors and so once the invasion occurs they have to make up their own story lines and actions to deal with it.

The Scrooge you see isn’t the Scrooge you and your kids know. In fact, this is not for the kiddies, but for open-minded adults who would like an evening of enjoyment with plenty of single entendres. You will enjoy when Scrooge tries to form some connection with the unexpected visitor, and although it veers way off course many times, there is a story about some old geezer who thinks Christmas is a humbug.

Ener if you have enjoyed the show in past years. there’s plenty else that’s new in this one, as the main cast has to improvise to deal with some invader they didn’t know was coming until about 5 minutes before curtain time. On a preview night he got visited by Rip Taylor’s ghost who had all of Taylor’s moves and schticks down pat. But, keep in mind that the invader changes every night. Who knows what evil may lurk in the minds of men? But by the time the ghost of Christmas future shows up things seem more Dickensian.

Dad’s Garage is located in a former church on Ezzard St, down in the Old Fourth Ward. You can get online driving directions. Plenty of free parking and come early to enjoy the concessions area with cabaret style seating. This one runs about 2 hours, which includes an intermission.

Their gift to you is that they often have an improv show which follows, and you are invited to hang in for more laughs. More info and tickets at DadsGarage.com