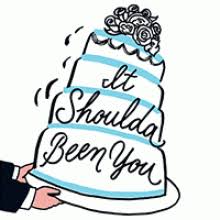 It Shoulda Been You
Out of Box Theatre
through February 24, 2018

For a small black box theatre to bring a cast of more than a dozen characters center stage is quite a feat in itself. This musical by Barbara Anselmi with a score by Brian Hargrove is the first class nutty tale of a wedding that could possibly go wrong.

The bride is Jewish. The groom is Catholic. Her mother is a force of nature, his mother is a tempest in a cocktail shaker. And when the bride’s ex-boyfriend shows up, the perfect wedding starts to unravel faster than you can whistle “Here Comes the Bride!”

Jenny (Kelsey South) and Rebecca (Hannah Marie Craton) are sisters, but with typical sibling rivalries. The show premiered in 2011 and it went to Broadway in 2015 where it played to much acclaim. Carolyn Choe and Zip Rampy are the parents of these girls, and are stereotypical portrayals of the controlling Jewish mother and the hubby who can always say “Yes, dear.”

I can’t get into the minutia of the story, as you will want to sit through it. It’s one that may bring up some of the older Norman Lear works. Trevor Perry is a riot as Albert, the wedding organizer, as is Eileen Howard as the mouthy Aunt Sheila. You can start off by just imagining this as a cartoon Jewish family, where one of the girls is marrying a gentleman of a different faith. And while it not bother the groom’s father, his mother deals with it by a few more martinis.

The wedding rumpus moves through two acts with 19 songs, which bring out more of the essence of each of the characters. I’m not telling you who goes where and how, as that’s the core of the play. I can tell you that you’ll enjoy every minute of it. Kiernan Matts directed this one with the music supplied by Annie Cook. The set designed by Carolyn Choe and Kiernan Matts works sooo well, as any Moliere-type set would.

Out of Box is on Cobb Parkway (Route 41) south of the Big Chicken, and there is free parking and nosh available. Get more info and tickets at OutOfBoxTheatre.com