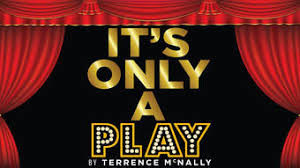 It’s Only a Play
Process Theatre Company
through September 22, 2018

The Process Theatre Company is associated with Onstage Atlanta, but this show is being presented in Marietta, at Out of Box Theatre on Cobb Parkway, just south of The Big Chicken.

The play by Terrence McNally is a screaming delight. A first-time Broadway producer, Julia Budder (Liane LeMaster), hosts an opening night party for the cast and crew of a play called The Golden Egg that she financed. Playwright, Peter Austin (Larry Davis), is there awaiting the reviews. There is some angst as they are joined by other principals. The star of the play is Virginia (Barbara Cole Uterhardt), who is addicted to some bad stuff as well as her self.

An actor, James Wicker (Zip Rampy),is a successful TV actor who turned down the lead in the play, and is glad that he did so. And, you meet a critic, Ira Drew (Bob Smith) who thinks everybody is a failure, inasmuch as he has been

They’re all having their stress fits, especially the Brit who directed the show, Frank Finger (Pat Young) who wishes nothing for himself other than more flops. A lot of comedy is also provided by a valet character, Gus (Frankie Asher), who is working for Miss Budder at her NYC flat, but desperately wants to get onstage or in front of a camera.

DeWayne Morgan must have been thrilled to direct this one. If you know some of these actors, you will be impressed at the different personae the bring to the stage. And one fascinating thing is that in real life, this show was a flop when it first hit the boards. But, as it has gone through several revisions it became an incredible success. So many of the top grade comic performers you recognize have played these roles over the past decade.

This is a total delight, and easy to get to with free parking. Have ball. Plenty of expletives so maybe not for Ms. Prim or the kiddies, but the rest of you will laugh your donkey off. More info and tickets at OnstageAtlanta.com